Hi, I’m Jordan Paris! Today, I’m recording a solo episode for my great friend Steve Jordan about the 5-step process you can use to start your day in a good mood.

Subscribe to I Am Healthy & Fit on Apple and Spotify.

My interview on I Am Healthy & Fit from over two years ago: https://stevejordan.com/growth-mindset-university-with-jordan-paris/

Jordan’s podcast, Growth Mindset University, is ranked #6 in Apple’s Self-Improvement category, #3 in the Training category, #5 in the How-To category. In Education, one of Apple’s most competitive categories, the show was ranked #15. The show is also ranked highly in 40+ countries worldwide. On the show, he interviews young up-and-comers and the most successful people on planet earth like James Altucher, Grant Cardone, Robert Greene, Mark Manson, Dan Millman, Ryan Serhant, Dean Graziosi, and Naveen Jain.

Jordan is the founder and creative director of Trend Up Media, a one-stop podcast agency that produces profitable podcasts to help businesses grow in both profit and influence.

His approach to life and business is simple yet powerful: Don’t make a living, design a life. With this creator’s mentality, Jordan has been able to produce outstanding results for himself and challenge others to rise above circumstances, break the mold of society, and take control of their lives. 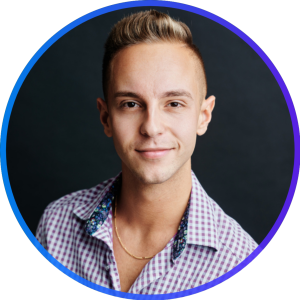 Jordan Paris is a 20-year-old author, trainer, entrepreneur, blogger, podcast host, former college-athlete, and online coach showcased in Men’s Health as a beacon of light for inspiring people from all walks of life. His online coaching is sought-after by people across the globe. After suffering from depression for most of high school, Jordan realized that if things were going to change, then he had to change. This realization compelled him to take control of his life. As a junior in high school, he started by reading Awaken the Giant Within by Tony Robbins, which changed everything for him. After graduating from high school in 2016, he decided to become a personal trainer, which lead him to a summer internship in Los Angeles with celebrity trainer Steve Jordan. Steve became a trusted mentor and friend who served as a bridge for Jordan from a time of trouble to a time of triumph. Upon arriving at Florida Gulf Coast University just after his internship, Jordan capitalized on his fresh start, becoming a cheerleader, serving as area council president, and joining a fraternity. With a newfound sense of joy and confidence, he started blogging while studying to become a personal trainer. He landed his first clients soon after and launched his online programs in the spring of 2017. A few months later, he started a small web design business. Jordan first appeared in Men’s Health in September of 2017. After breaking the chains of depression and rising from nothing, he decided to share what he has learned along his journey, embarking on a relentless mission to write Growth Mindset University in just 29 days. Nina Manolson M.A. NBC-HWC is a Body-Peace® coach. She helps women end the war with food and body and finally feel truly at home in... Dr. David Minkoff is an alternative healthcare expert with over 4 decades of experience and a best-selling author that regularly hosts teleconferences for other practitioners,... About: Rodney Corn is the Director of Education for the world’s premiere brand of strength training equipment and education Eleiko. With over 30 years in the...